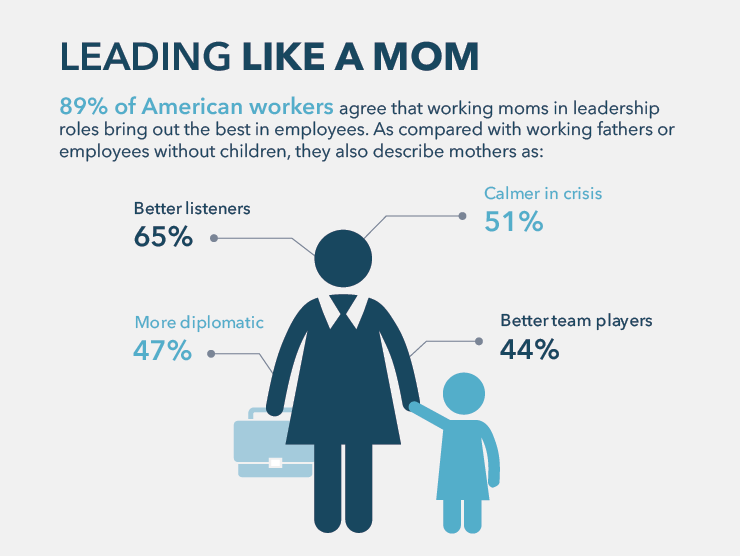 January 28, 2019 – Results of a new study released today show that working women face a negative effect on their careers as they grow their families, and yet the same study shows working women bring skills to the workplace that can actually make them the best leaders. According to Bright Horizons' fifth-annual Modern Family Index, 72 percent of both working moms and dads agree that women are penalized in their careers for starting families, while men are not. Despite being viewed by their peers as possessing the qualities that make for strong leaders, working moms find they come up against roadblocks at work. A full 78 percent believe they must prove themselves more than others to gain a leadership position at work. And with leadership roles often dominated by men, almost two in five (37 percent) working moms worry that they do not fit the leadership mold.

Motherhood is the Best Training Ground for Leadership

The fifth annual report in Bright Horizons' Modern Family Index (MFI) series, conducted by Kelton Research, offers concrete data showing that working moms are the best equipped to bring 21st century leadership skills to the workplace. According to the survey, those who "lead like a mom" may be the missing ingredient businesses need to realize their full potential. Working Americans almost unanimously agree (91 percent) that working moms bring unique skills to leadership roles, and 89 percent feel they bring out the best in employees.

Despite possessing the very skills needed to succeed in leadership, this year's Modern Family Index shows that working mothers are being held back in the workplace.  According to the survey:

The survey reveals little progress, and in some cases a worsening of the workplace culture in the last five years. Workplaces are still dominated by a culture that continues to favor men as business leaders despite women being ambitious and fit to lead. The data uncovers that in today's society, working mothers are under a microscope and negative perceptions from senior leaders and colleagues are not only holding moms back in the workplace, but are also increasingly impacting women's confidence:

The 2018 Modern Family Index demonstrates the current portrait of senior leadership is far from equal. In fact, 38 percent of mothers say that senior leadership is dominated by a “boys club”.  Nearly nine in ten (87 percent) of employed Americans feel that companies can do more to help foster moms in leadership positions. At the same time, moms are hungry for more opportunity and a path to the top free of unnecessary roadblocks. According to the findings, nearly two in five working moms (39 percent) say they will stay with a company if they get assurances that they will have the same growth opportunities as those without children. Almost one in three (32 percent) will also stay if they are guaranteed that no responsibilities will be taken from them. Existing leadership must break through the traditional gender norms and prejudiced notions of working moms in leadership to create a more supportive environment that allows these women to realize their career potential.

"We need to support and embrace motherhood in the workplace and learn from our leaders who are also parents," says Bright Horizons Chief Human Resources Officer, Maribeth Bearfield. "In order to move forward, change attitudes, and make progress, organizations should focus on supporting young female professionals and holding all employees accountable to make sure there is a real path to the top for women as they grow their families."