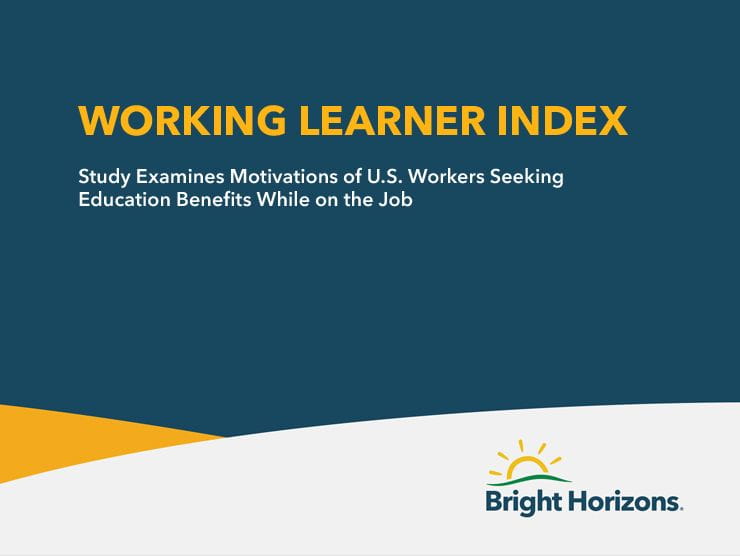 October 24, 2019 – Bright Horizons, publisher of the Modern Family Index, today released its first annual Working Learner Index, which surveyed nearly 30,000 American working adults who are also pursuing higher education. With 90 percent of respondents expecting automation to change their job or industry, the findings suggest that anxiety about the future of work — and an estimated $1.5 billion in outstanding student debt — is driving unprecedented employee interest in benefits such as reimbursement, up-skilling, and student loan repayment. Among the nation’s youngest workers, education and training now outrank paid sick/vacation leave and retirement benefits.

“As the pace of technological change accelerates, the role — and value — of education in the workplace is exploding,” said Patrick Donovan, senior vice president of emerging services for Bright Horizons. “The Working Learner Index establishes a baseline understanding of how employers can support and enable learning to equip employees for the fourth industrial revolution.”

According to a Georgetown University study, there are now 14 million Americans who are both active in the labor market — and formally enrolled in some form of postsecondary education or training. An overwhelming majority (84 percent) of all Working Learner Index respondents confirmed that the skills or degree earned through their employer’s tuition reimbursement program helped prepare them for the future of work, and 82 percent say they’re a more effective employee.

One generation, however, seemed to prioritize learning the most: Generation Z. Today’s youngest workers called education the most desirable benefit (not including healthcare), outpacing even paid sick/vacation leave and retirement savings programs. Eighty-eight percent say they would be more likely to recommend their employer because of its education benefits.

For workers of all ages, keeping pace with or getting ahead of changes in a job — more so than increased earning potential — was the top reason to pursue education while working. But financial concerns still remain; about half of survey respondents reported having some student loan debt, and 49 percent said they would not have pursued education if their employers had not offered tuition reimbursement programs.

The Index also highlighted demand for online learning, and includes notable findings about the success of working learners. More than half of respondents earning their bachelor’s degree did so in less than four year — including 14 percent who completed it in under two years. Forty-two percent of respondents said the most important factor when choosing a school for continued education was that it offered fully online classes and coursework.

For employers, the Index suggests that education benefits are crucial for recruiting and retaining talent. Seventy-six percent of respondents agree they are more likely to stay with their employer because of its tuition reimbursement benefit.