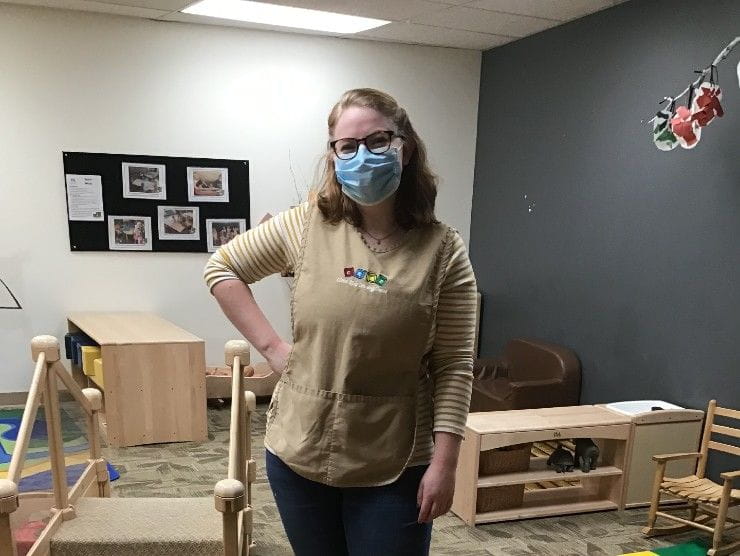 October 25, 2021 – Kelsey Campbell has been associated with Clever Kids Learning Center managed by Bright Horizons in Lakewood, CO since she was 6 months old. Kelsey was one of the first infants enrolled when the center’s infant-toddler wing opened in the summer of 1998 and attended throughout her early childhood until she went off to kindergarten.

“Being at Clever Kids as a child, I remember doing art activities and things that seemed so amazing to me as a little 5-year-old,” says Kelsey. “There was hardly ever a day I remember not wanting to go to school, I'm sure there were days as a kid, but when I think back, I have only smiles.”

In the summer of 2013, Kelsey was invited to a 20th anniversary celebration for the Clever Kids Learning Center. Walking the center’s hallways lined with photos, she realized she would love to become a teacher at Bright Horizons. When she was 17 years old, she started working part-time after school at the center, which eventually led to a full-time position after graduation in the infant room alongside her former teacher, Miss Meg. As of this year, Kelsey has been working at the center for 6 years and has transitioned to a full-time position in the toddler room.

“Being a teacher means the world to me,” says Kelsey. “Working at Bright Horizons has been an amazing opportunity to help children learn something new every day and watch how they use that learning in their real life.”

During her time at the Clever Kids Learning Center, Kelsey has been pursuing her degree in Early Childhood Education through the Horizons Teacher Degree Program. The Horizons Teacher Degree Program is a no-cost degree program for all full-time employees in the Bright Horizon’s early education centers and preschools. The program allows employees to earn an associate and bachelor’s degree in early childhood education for free.

Kelsey received her associate degree in Early Childhood Education from University of Arizona Global Campus in February and is currently working towards her bachelor’s degree, which she expects to complete next year.

“Getting my degree represents a lot to me,” says Kelsey. “It represents my future, opening up more career opportunities. Opportunities that I wouldn't have if I didn't have a degree.”

Deborah Wolf, Director at the Clever Kids Learning Center managed by Bright Horizons believes that Kelsey’s investment in her future and the future of the children she teaches was instilled in her at a young age.

“A good word to describe Kelsey is invested.  She is invested in completing the Horizons Teacher Degree Program to prove that she has the educational knowledge to back her skills. She is invested in the future of society by creating a caring and engaging environment, giving her best efforts to allow young children to feel confident in their abilities and connected to one another,” says Deborah. “I think this was instilled in her while growing up in Clever Kids Learning Center!”